Concerts In The Valley is alive again!!!

Concerts In The Valley Is Alive And Well

To all of the fans of the house concert series, Concerts In The Valley, and formerly Concerts With A View, the exciting news is that the music is again flowing through the Shenandoah Valley. Cross Keys Studio has aligned with Court Square Theater, in downtown Harrisonburg to revive the concert series. Starting in early December, we (Cross Keys Studio) will be bringing a series of fine musical artists to the heart of the Shenandoah Valley. We have signed a collaboration agreement with Court Square Theater and the Arts Council of the Valley. The theater will provide the facility, ticketing and marketing efforts and Cross Keys Studio will be providing talented musicians, technical management of sound and video from the theater and additional marketing expertise.

To kick off the revival of the series we are ecstatic to be able to provide a multi-media show featuring long-time bluesman, Corey Harris. Corey has been busy lately as he has recently released a book, “Bluespeople Illustrated: Legends of the Blues: Drawings, discographies and biographies of the 20th century's greatest blues men and women”. Here is an excerpt from the book jacket - “Which bluesman once played baseball for the Negro League? Which bluesman was once the sparring partner for the great Joe Louis? Which famous blues woman got her first job as a dancer for the great Ma Rainey? How much do we really know the blues? Welcome to the world of Blues People: Legends of the Blues...a brand new e-book of drawings, biographies and discographies of some of the greatest traditional blues players who ever lived, meticulously drawn and written by world-renowned blues musician and MacArthur 'genius' grant recipient Corey Harris. This book is the first of its kind: an illustrated, in depth biography of the greatest blues players of the 20th century by a practicing African American blues musician. This monumental work includes in-depth biographies and discographies as well as his personal experiences with some of the most influential blues artists of our times.”

Corey will join us at Court Square Theater on 04-DEC-2021 to talk directly with the audience about the details of the book – the who, what and why of how it came to life. Join us and hear Corey’s message, ask your questions and learn the back story of one of this years most important literary releases. To top it off Corey will bring a few friends along to play music together for a full set and he will have copies of the book to sell and sign during intermission/after the show. 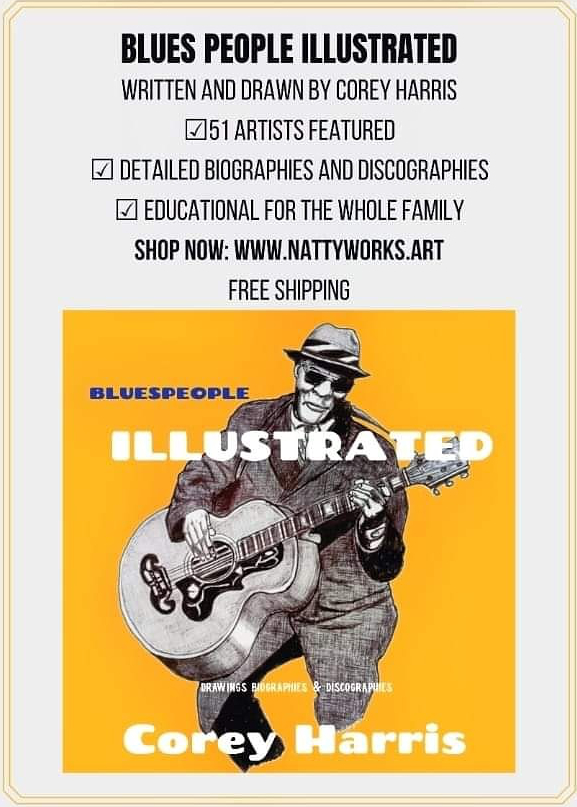 New Location For The House Concerts

Rocking in the studio – on a Monday night no less???